Has the Bitcoin ‘Bubble’ Burst? 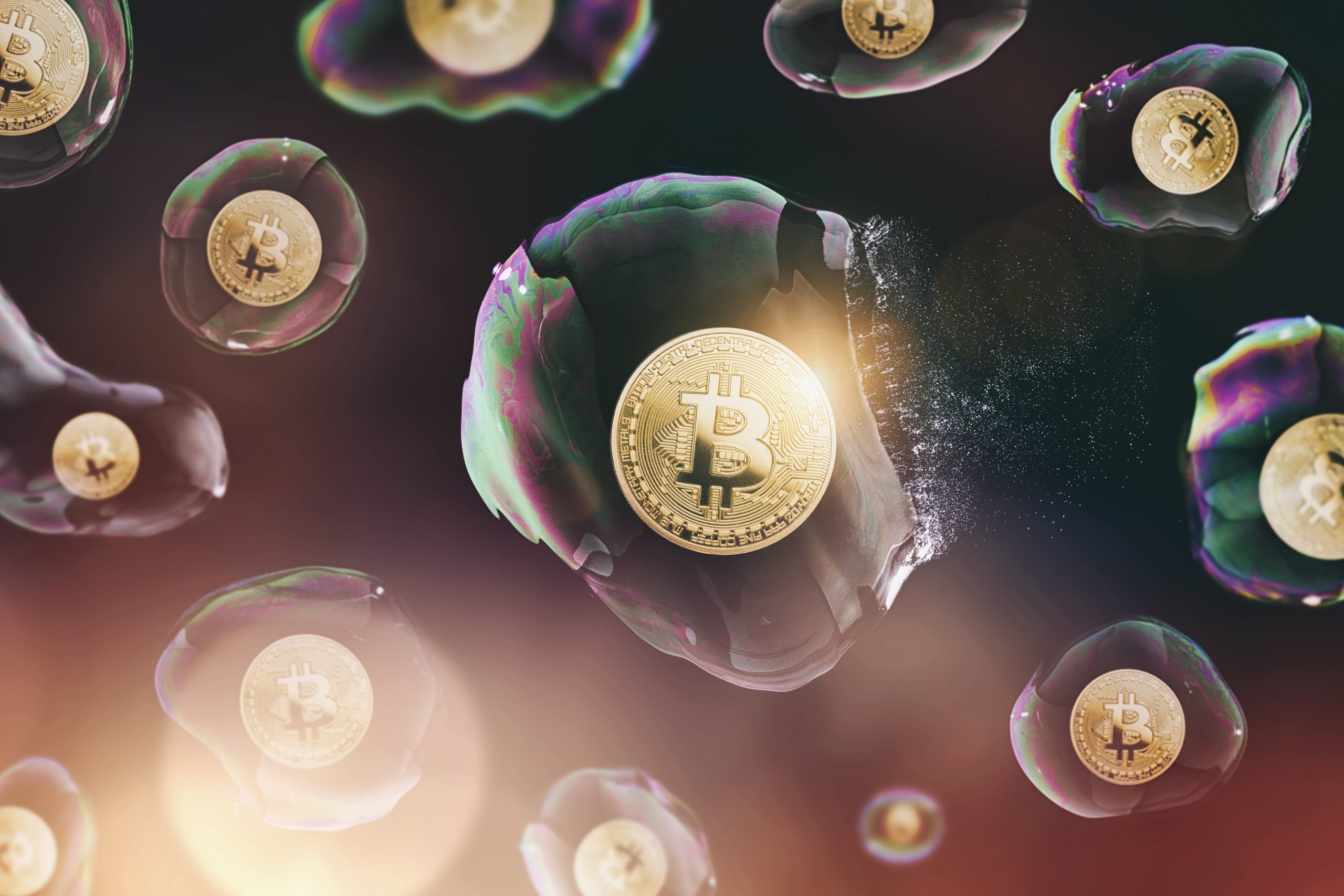 Following a volatile year for Bitcoin and other cryptocurrencies, Ceris Hymas reflects on the advice given by CEO Simon Lewis in his article ‘Bitcoin – Fairy Tales Don’t Always Have a Happy Ending’ and explains why she believes the Bitcoin ‘Bubble’ may have finally burst.

You may recall that in January 2018 CEO, Simon Lewis, wrote an article titled ‘Bitcoin – Fairy Tales Don’t Always Have a Happy Ending’. His article was prompted by the meteoric rise in the value of the currency and the considerable hype around its future potential. In the article Simon gave valuable advice to those who were considering investing in Bitcoin and other cryptocurrencies and explained the reasons behind his scepticism. As well as cautioning those contemplating investment, he also urged those who had already invested to seriously consider reducing their stake in the currency.

‘Those speculators that bought Bitcoin at or close to its peak, should seriously think about cutting their losses, particularly if they cannot afford to lose any more.’

Now, less than a year on, I can only hope that investors headed Simon’s advice. At the time of writing that article Bitcoin was valued at $11,686, but as Simon predicted, the value of Bitcoin had continued to decline. Bitcoin has now reached its lowest value of the year so far, at $3,699. For those who purchased Bitcoin in January 2018, that represents a loss of $7,987 or 68%. But, for those speculative investors who purchased Bitcoin at the very peak of the market ($19,498 Dec 2017), this represents a loss of $15,799 or 81%. A large loss to bear, for even the most speculative of investors.

Will Bitcoin and other cryptocurrencies regain their value?

The answer you get depends on who you ask. Following the negative publicity around Bitcoin in recent months, many cryptocurrency ‘experts’ have stepped up to give their predictions on the future of Bitcoin. In January 2018 a panel of cryptocurrency experts (compiled by price comparison site Finder) predicted the value of Bitcoin would reach a staggering $33,000 by the end of the year. In June 2018 they revised this figure to an optimistic $14,638. It is now predicted that Bitcoin value will be somewhere between $6,500 and $8,500 by the end of 2018, but even that would seem unlikely.

My point here is that the value of Bitcoin is so volatile that even the cryptocurrency experts cannot give an accurate prediction of its value in the next few days, let alone the next few months. What’s more, cryptocurrency is highly respondent to media headlines, so releasing optimistic predictions could in itself be a ploy to influence the value of Bitcoin and reassure investors of its potential for profit.

So why are cryptocurrencies so volatile?

Simon’s previous article touched on the risks of investing in cryptocurrency and this risk also happens to be part of the reason behind its volatility, but there are also other things to consider.

Media coverage is a large influencer of cryptocurrency value, in particular, Bitcoin (as the most popular cryptocurrency).  Headlines which highlight crashes in cryptocurrency cause panic for investors and in turn cause the value to continue to decline. For example, in September 2017 JP Morgan CEO, Jamie Dimon, slammed Bitcoin at a financial services conference; stating that he would fire any trader who traded on the currency. This caused the currency to suffer a 6% loss in value immediately. Likewise, positive headlines can cause the value of cryptocurrency to increase substantially, as it did in 2017. However, media focus in 2018 has largely been on the risks associated with investing in cryptocurrency.

In June 2018 South Korean cryptocurrency exchange, Coinrail, was attacked by Bitcoin hackers, resulting in the loss of 30% of the coins traded on their exchange. Although the exact value of this was never released, it was estimated at around $27.8 million. The value of Bitcoin dropped by 10% within an hour, highlighting the risk investors face due to hackers and cyber thieves.

Cryptocurrency is a decentralised currency which means that, unlike local currencies, there is no central authority regulating it. Instead, transactions are approved by a non-centralised network of computer systems or ‘nodes’. This allows users to avoid normal payment processes, which attracts money laundering or other criminal activity. This explains why Governments have refused to adopt the currency and why it remains unregulated in many countries. In December 2017 the value of Bitcoin dropped by $1,000 after South Korea announced a crackdown on the trading of those wishing to avoid tax or engage in digital currency.

Similar to the price of gold, Bitcoin’s value is highly dependent on supply and demand. The demand for Bitcoin is influenced by factors such as awareness of the currency, its reputation and trust in the security of the technology behind it. Like gold, if the demand is high and supply is low, the value of Bitcoin will increase reflecting investors perceived value. What’s more, Bitcoin has a limited supply of 21 million tokens, which means that when demand for the currency is high it causes dramatic spikes in its value.

What is the future of Bitcoin and other cryptocurrencies?

Again, it really depends on who you ask. The cryptocurrency experts are unashamedly bullish with their views that the value of Bitcoin will rise again, with some predicting the value of Bitcoin could reach the million-dollar mark in the next 20 years. But then again, didn’t they predict the value to be at $33,000 dollars by the end of 2018?

The reality is that the future of Bitcoin and cryptocurrency is uncertain and largely dependent on media coverage, security and regulation. One thing that we can be certain of is that the Blockchain technology underlying cryptocurrencies has a much brighter future.

So the question still remains, what does the future hold for cryptocurrencies? I think we can all agree that the future value of cryptocurrencies is very hard to predict and, if the value of Bitcoin continues to plummet, we can assume the Bitcoin ‘Bubble’ has, for the time being, well and truly burst. Time will tell whether it will manage to re-inflate.

Note: The views expressed in this article should not be taken as investment advice. They are the views and opinion of the writer only.