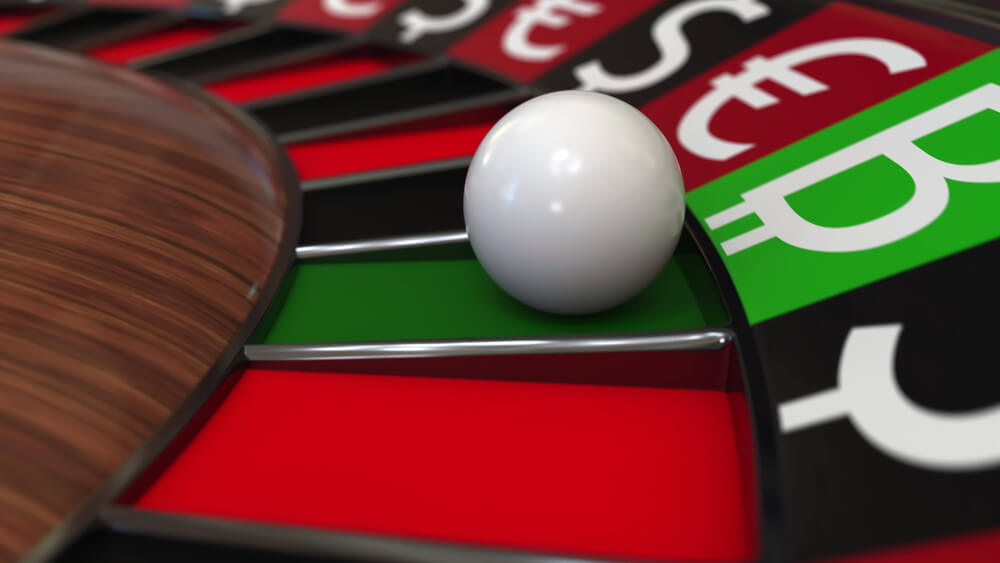 My children have in turn been fascinated by an oversized and elaborately decorated shiny silver coin. “Is it treasure Dad?” I am afraid that I have provided many misleading answers over the years, attributing the coin to the result of some unsavoury early-life career choices, including pirate, bank robber and international jewel thief. Some might say that ‘financial adviser’ represents a natural progression. Anyway, my point is that to a 4-year old, such tales are a source of wide-eyed wonderment, with the result that the coin has survived to be handed down and sit proudly in successive treasure boxes. In truth, the coin has no value, except in the Las Vegas casino Circus Circus, where you could exchange it for a $5 chip, perhaps to take a chance at the roulette wheel.

Scepticism typically develops at around age 7. “You’re too fat to have been a jewel thief Dad because you couldn’t climb in through a window” is one of the more flattering responses to my tales of daring do. But even as we get older and a lot more sceptical about everything, the child still lurks within us all.

I am not saying that everyone who has recently bought Bitcoin is child-like, but there has definitely been a wide-eyed wonderment and lack of understanding that has driven many otherwise sensible investors into an irrational frenzy. Warren Buffet, the well-regarded and highly successful long term investor (he is the World’s third richest man) once said: “If you don’t understand it, don’t invest in it.” which is sage advice.

What is Bitcoin? (otherwise known as the ‘geeky’ bit)

Bitcoin is a ‘cryptocurrency’, which is best described as a digital currency in which encryption techniques are used to regulate the generation of units of currency and verify the transfer of funds, operating independently of a central bank.  Bitcoin was the first cryptocurrency (although many others have followed in its wake) and was created in 2008; perhaps in response to the global financial crisis and concerns over the safety of money deposited with banks.

As a decentralised currency it has no single administrator and operates without an intermediary via a peer-to-peer network, with transactions taking place directly between users. In essence, it is a ledger based system known as a distributed ledger; full copies of the ledger exist in around 6,000 locations (nodes) around the world and these ledgers continually synchronise. This creates a method of recording ownership that is less prone to corruption.  If this sounds interesting it is worth finding out more about the ‘blockchain’ technology on which cryptocurrencies are based, because it offers many exciting applications for the future.

Other things worth knowing are that the value of the currency fluctuates according to the principles of supply and demand and there is a rules-enforced limit to the amount of Bitcoin currency that can be issued. Also, Bitcoin is an accepted method of payment in over 100,000 establishments around the world and last year there were around 6 million unique users of cryptocurrency, the majority of them with Bitcoin stuffed in their digital wallets.

Digital wallets allow holders of the currency to store it confidentially. As a consequence, although transactions are transparent to all, the identity of the transaction participants is not recorded.

Let’s return to the Bitcoin ‘story’.

There is a compelling theory that underpins the belief that, in the long run, the only possible trajectory for the price of Bitcoin is upwards. That is because there is a finite limit (not yet reached) to the amount of Bitcoin in issue. Once the limit is reached, the price must rise as the world gets richer, because of the principles of supply and demand.

On 16 January 2017 Bitcoin was valued at $827. At midday on 19 January 2018, Bitcoin was valued at $11,686 with the highest recorded value in December 2017 at $19,498. Even though the price has fallen by 40% from its peak in less than a month, those speculators who purchased Bitcoin in January 2017 are still sitting on a handsome profit. However, there is a good chance that there is further to fall so it is worth remembering that a profit is not really a profit until it is crystallised. Those speculators that bought Bitcoin at or close to its peak, should seriously think about cutting their losses, particularly if they cannot afford to lose any more. The following visual representation of an archetypal bubble might prove instructive: 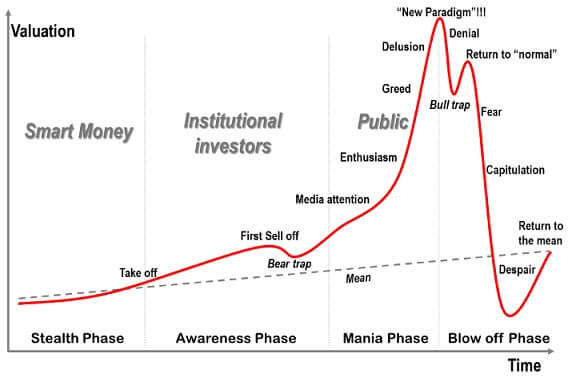 If the prospect of price volatility has failed to deter you, consider that the trading of cryptocurrencies is currently an unregulated activity. The fact that many cryptocurrencies can be purchased, traded and used anonymously means that they are the perfect instrument for money laundering and tax evasion. In other words, the growth in use of unregulated cryptocurrencies is an existential threat to government because a government cannot maintain law and order if it cannot regulate the flow of money and it cannot finance itself if it cannot reliably raise revenue.

It seems likely that legislation and regulation will soon follow and as a consequence, those using Bitcoin for illegal reasons will divert their funds elsewhere, reducing demand and price accordingly.

Another risk of Bitcoin and other cryptocurrencies is that a hacker might find a way to access your digital wallet and steal your Bitcoin. If that happened there is no guarantee that your money would ever be returned because there is no regulation to protect you and no compensation scheme to bail you out. It is important to remember that hackers are not all teenagers misbehaving from their bedrooms. Many countries (allegedly) have substantial and sophisticated state funded hacking operations, notably (again, allegedly) Russia, China and North Korea.

In December 2017, Slovenian based Bitcoin marketplace, NiceHash, suspended operations following the theft of nearly $64 million in Bitcoin. In 2014, Japan based Mt. Gox was forced to shut down, following a breach that resulted in the theft of 850,000 Bitcoin. That’s worth around $10 billion today.

I don’t want to tell you fairy tales

There have been times when I have been tempted to jump on the bandwagon, but I have resisted. I honestly think that although cryptocurrencies and Bitcoin have a bright future, we have many years to go before their price behaves rationally.

If I wanted to speculate, it might be more fun to return to Circus Circus clutching my magical shiny silver coin…

Note: The views expressed in this article should not be taken as investment advice. They are the views and opinion of the writer only.