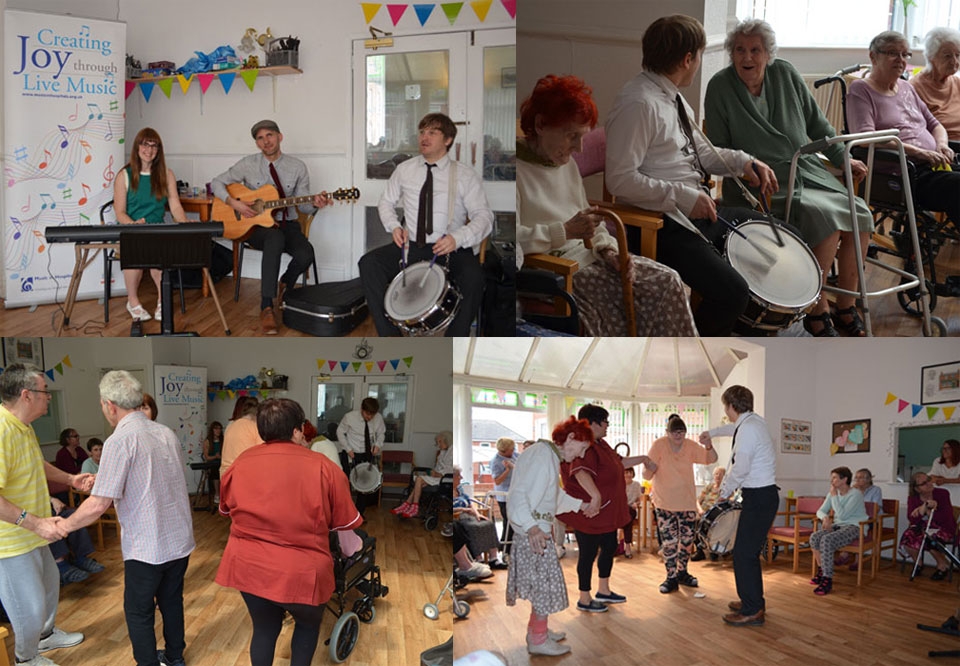 In 2016, the Elmbridge Community Fund awarded Music in Hospitals & Care a grant to enable them to perform at two care homes in Elmbridge. Two years later, we were delighted to be invited back to meet with the charity and find out more about how the donation was used to support the community. It was a pleasure to attend one of their concerts at Royal Cambridge Home in East Mosley and we were fascinated to see first-hand the influence that music therapy can have on its participants.

Originally paraphrased from Hans Christian Anderson’s “What the Moon Saw”, this quote has become a mantra of sorts for many music therapists. Although the 20th century profession formally began following the devastation of World War I and World War II, the concept that music could act as a kind of therapy to aid healing and wellbeing, is as old as the writings of Aristotle.

With an estimated 416,000 people living in care homes in the UK and 16.252 million people admitted to hospital every year, music therapy is as crucial today as it was to the war veterans of the 20th century.

Music in Hospitals and Care (MiHC) are firm believers in the power of music. The charity, originally named The Council for Music in Hospitals, was created in 1948 with the aim of providing support to war veterans on the road to recovery. Today, the charity delivers around 5,000 concerts across the UK each year and reaches around 130,000 children and adults.

A large proportion of their concerts are held in care homes, but they also run a number of projects within hospitals. These include the ICU-Hear project taking place in critical care units across the UK and the Lullaby Hour which recently launched at the Freeman Hospital in Newcastle on the children’s heart unit, with a mission to roll it out nationwide in the near future. They also use these concerts to undertake important research into the benefit of music; their research partner Dr Nigel Marshall has used the findings to publish a number of reports in international journals.

The Power of Music

On arrival at the care home, we were welcomed by Senior Fundraising Officer, Emily Winchester, CEO of MiHC, Steve Rowland-Jones and Musician, Serguei Pachnine. The concert was held in the main living space and the residents were seated patiently around the edge of the room. As we joined the residents it was clear that many of them suffered from degenerative illnesses, which clearly affected their cognitive functions. However, as the music began it was uplifting to see the reaction on the residents faces as they became more animated and engaged.

Serguei, originally from Russia, was clearly an extremely talented accordion player, specialising in Russian and British medleys. With each song he played, the residents became more and more enthusiastic; singing along, naming the various songs in his repertoire and clapping their hands. By the end of the concert Serguei had all of the residents (and us) joining in, as he handed out a medley of Russian instruments and encouraged everyone to sing along to the famous tunes of the 1940’s and 50’s. An astounding transformation had taken place in just a matter of minutes, all down to Serguei’s infectious love of music and his connection with his audience.

Following the concert, we accepted an invitation to the MiHC office in Walton, where we met with the team behind the charity to hear about the many projects they have been involved in over the years. Whilst still very much involved with ex-servicemen and women, the charity continues to perform concerts to those in rehabilitation and those suffering from post-traumatic stress disorder. CEO of MiHC, Steve Rowland-Jones, shared with us a personal first-hand experience of how he witnessed the power of music and the clear benefits, not only felt by the residents or inpatients, but also by their relatives. I am sure he wouldn’t mind us sharing.

“My mother was in the dementia unit in Herefordshire when MiHC performed one of their concerts there. Her condition was quite advanced and by that point it was not uncommon for her to be unpleasant and sometimes violent.  I sat next to her during the concert and held her hand. As the music started, she began to squeeze my hand in time with the music and smile as she listened to the familiar tunes. It was the first time, in a long time, that I saw a glimpse of the mum I had remembered before the dementia. Although I was quite sure that my mother would not remember the concert within minutes of it finishing, the memories that I have of that day will stay with me forever.”

Our visit certainly demonstrated that ‘when words fail, music speaks’ and we were delighted that the Elmbridge Community Fund was able to support such a worthwhile cause.

Like most charities, MiHC is restricted by the amount of funding available to them, and whilst they have the platforms and musicians in place to provide an infinite number of concerts every year, they can only do this if they have the funds available to make these concerts happen.

Receiving grants and donations is imperative to the survival of charities like MiHC, and precisely why the Elmbridge Community Fund focuses its efforts on securing long-term funding for local charities and voluntary groups. By pooling donations from individuals, businesses and families, they are able to provide a sustainable and permanent source of funding to support evolving community needs.

We need your help to ensure that we can continue to provide these grants to local charities like MiHC, and other voluntary groups in the Elmbridge area. If you would like to find out more about making a donation or leaving a legacy, please visit click here.

For more information on Music in Hospitals and Care, please click here.

Submit your email address below to receive CEO insights

Wordpress Social Share Plugin powered by Ultimatelysocial
Skip to toolbar
We use cookies to ensure that we give you the best experience on our website. You can find out more by reading our Statements and Risk Warnings.OK
CONTACT US