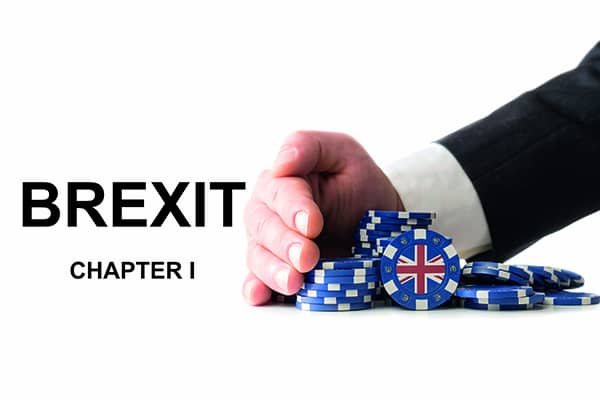 0n 23 June we will be asked to cast our vote on whether the UK should remain within or leave the European Union. Simon Lewis, CEO of Partridge Muir & Warren Ltd, begins a series of articles on the subject.

The Government line is that leaving the European Union (EU) would be risky and that, now is not the time to take a risk with the economy. We are therefore encouraged to vote ‘stay’. The fact that the Government is taking a risk by holding a referendum at this time, primarily in response to internal party politics, is not without irony.

Over the next few months I shall sift through the economic evidence and hopefully filter out some of the propaganda and scare-mongering that is a feature of both sides of the public debate. I can then make an informed choice and hopefully choose correctly from the perspective of my children and their future, because this decision is likely to have a more profound effect on how the UK will fare in the longer term.

I have unearthed some interesting facts that have kick-started my thought process. I shall cover some in this article although the subject is so broad that I will need to revisit it later. I hope that by sharing my journey I might provide something useful to add to your own deliberations.

On paper the EU is a good idea – a liberal democracy with a population of 500 million providing the economic benefit and global influence that comes from scale and uniformity. The problem is that, in many ways, the EU is neither liberal nor democratic and more recently, far from providing economic vigour through uniformity, competing internal dynamics have encouraged procrastination and economic stagnation.

Around 20 years ago I spent a few days at the European Parliament as part of a Department of Trade and Industry trip for young entrepreneurs. We were granted a privileged level of access and I travelled there with a sense of excitement, only to return disillusioned. I was startled by the scale of self indulgent largesse and the evident waste of European taxpayers’ hard earned money. I lost count of the number of champagne receptions I walked past, the number of idle interpreters at the European Parliament and the amount of parliamentary time wasted bickering about procedural issues rather then matters of substance. I was particularly disconcerted by how far removed the bubble of the Brussels elite was from the real world and somewhat perturbed that they often only described themselves as ‘Europeans’ and were somewhat disdainful of national identity.

You might be thinking that I am a Eurosceptic poised to vote to leave, but the truth is I haven’t yet made up my mind. I am certainly sceptical about European institutions and believe that there is far too much cronyism and corruption. However, I also believe there are economic benefits derived by being part of the EU, and these might be worth preserving, provided it doesn’t require us to surrender our national identity.

The long term prosperity of the UK will be largely influenced by its ability to trade freely with the rest of the world. At present approximately 50% of the UK’s goods exports are to the EU and a further 13% are to countries where there is reliance upon their free trade agreement with the EU. In other words, 63% of the UK’s goods exports are linked to membership of the EU, contrasted with the fact that the UK receives less than 10% of the EU’s exports. In other words, from the perspective of trade, it would seem that the UK is more dependant on Europe than Europe is dependant on the UK.

It is certainly true that an independent UK would be free to negotiate its own trade deals with the EU but if we wanted full access to the single market there would be a price to pay. For example, both Switzerland and Norway are required to accept the free movement of people and make substantial payments towards the EU budget in order to achieve their special status.

Another factor is that the goods and services we wished to export to the EU would still need to comply with EU regulations and having left the EU we would have even less influence over how these regulations were developed. At this juncture it would seem that leaving the EU but agreeing a deal to access the single market would likely not provide two of the major goals of the ‘leave’ campaign, whilst removing the UK’s ability to shape future policy.

Of course, we would also be free to negotiate trade deals outside the EU and other nations might well find it easier to agree terms with an independent UK than deal with the bureaucracy of Brussels. We might also be able to better target those countries that have a need for what the UK is good at offering, something that the EU as a whole might be less motivated to achieve. Nevertheless, we need to be realistic about our commercial appeal with a population of only 85 million potential customers, albeit relatively wealthy ones. Other nations and regional groups are likely to be far more interested in devoting their resources to negotiating access to the EU’s single market of 500 million potential customers.

Finally, it is worth remembering that the UK first applied for EU membership in 1960 but the application was vetoed by the French president, Charles de Gaulle. The UK finally joined in 1973 after De Gaulle’s resignation. Why were we so desperate to join? The answer is that the UK was not trading enough with the rest of the world, particularly those commonwealth nations that were keen to make a clean break from the colonial masters. There is scant evidence that the rest of world will be queuing to negotiate trade deals with a newly independent UK.

In conclusion, on the subject of trade I am certainly more ‘stay’ than ‘leave’. The trade related argument to stay is compelling and the only negative thought I have is the potential of collateral damage to the EU as a result of the stresses and strains (and possibly failure and fracture) of the Eurozone.

Nevertheless, trade is only part of the story and the internal debate continues. I need to give more thought to such issues as global influence, immigration, red tape, regulations, financial services and public spending before making a decision. So I guess it is only fair to say I need to observe a few more throws of the dice before I put my chips on the table.