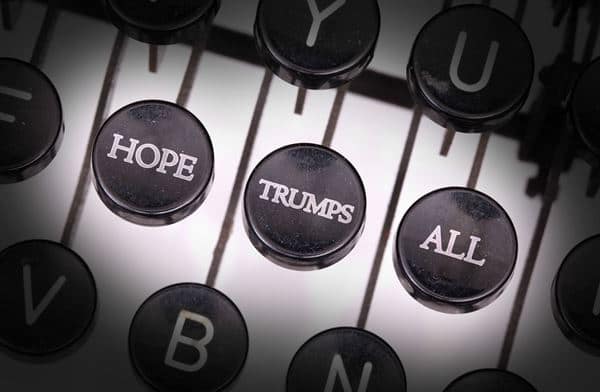 The dust is settling in the aftermath of Donald Trump’s surprise US presidential election victory. Simon Lewis considers what a Trump presidency might mean for UK investors.

Although only a few journalists might be prepared to admit it, the media must collectively believe that its fairy godmother waved her wand and made their wish come true. Love him or loathe him Trump will certainly make a colourful President of the United States and will surely provide countless column inches of controversy during his tenure. Even our beloved BBC has become pretty shameless in using its editing prowess to pluck comments out of context in order to reinforce the media spin on the Trump story. It is therefore important not to take everything we see, hear and read too literally.

It was smart to play the fool

Trump was taken seriously but not literally by his supporters and literally but not seriously by his detractors. It didn’t end well for his detractors and investors need to learn from this. In fact, the first assumption that should be made by investors is that although he might have different values and beliefs to many of us, Trump is smart. No fool could firstly build a sizeable personal fortune from scratch and then go on to win a US presidential election. Trump worked out what was wrong with America and articulated what he believed he could do about it in a way that resonated with voters. He then played the role of plucky underdog to perfection in order to snatch victory from the clear favourite.

The American Dream has faded

Although compared to most mature economies the US has been performing well from the perspective of unemployment and GDP growth, such growth is well below its long term average. The problem with the US is that the ‘American Dream’ has been tarnished by rising inequality. It used to be the case that there was opportunity for all and in most cases, each successive generation could look forward to being more prosperous. That is no longer true and although some of the reasons that have led to this are hard to escape, the fact is that for many workers real terms take-home pay is no better than it was in the 1970s.

Globalisation takes much of the blame for this but protectionism is not the answer because it would be economically damaging on both sides of the barrier. If the US government wants to improve the employment prospects of its workers it needs to provide a stronger incentive for companies to invest in the US. At the moment such investment is discouraged by what is one of the highest corporation tax rates in the world (currently 35%). That’s one of the reasons why successful American companies like Apple chose to manufacture their computers and phones in China, Taiwan, Korea and Mongolia. It isn’t just about exploiting ‘cheap’ labour.

Monetary policy (low interest rates and quantitative easing, courtesy of the US Federal Reserve) has accentuated inequality because as well as shoring up the broken financial system it has acted to inflate the value of assets, widening the wealth gap between those with assets and those without. The actions of technocratic central bankers have also provided politicians with an excuse to dither – in a manner that is widely perceived to be motivated by their own self-interest – when it comes to much-needed economic reforms.

Whatever his apparent politics, prejudices and behaviours, Trump does stand for change and he will be motivated to deliver on this promise. He will be aided by the fact that, unlike his predecessor, he will have a theoretical majority in both the US Senate and the House of Representatives. This should mean that a watered down version of his ideas is likely to prevail, which is a significant departure from the previous 8 years of Washington gridlock.

Although we have not heard much in terms of concrete policies (walls on the border aside) there is enough evidence to indicate how his business instincts might drive his political objectives. Trump appears determined to kick-start US economic growth and one of his pre-election pledges was to increase the economic growth rate to 4%, a level not seen for almost 20 years. It is a tall order but there are a few quick and easy fixes that might improve his chance of success.

A big increase in government spending would lift GDP growth, albeit at the expense of increased government borrowing, at least in the short term. This would allow substantial tax cuts for both individuals and businesses. Individuals would feel richer and spend more. Less tax and higher consumption would incentivise businesses to invest more. Over time, the resulting increase in economic activity would improve tax receipts, helping to offset the cost of borrowing required to finance the initial cut in rates. Additional fiscal stimulus could be provided by investment in infrastructure, another key campaign pledge.

The resulting fiscal expansion would take the pressure off the US Federal Reserve and allow interest rates to normalise over time, which will perhaps allow the asset bubble that has been created to gradually deflate rather than burst.

The high corporation tax rate encourages US businesses not to repatriate profits earned overseas and it is estimated that the amount of cash held offshore exceeds $2.5 trillion. Much of this money is therefore unproductive capital and it would be much better for the US economy if it were returned to the shareholders of such businesses to either spend or invest in other enterprises. It would make a lot of sense to offer a tax amnesty to businesses, for example by encouraging repatriation of profits at a discounted corporation tax rate of say 20%. This would theoretically raise $500 billion for the US government, which could be used to finance Trump’s plan to invest in the renewal of the country’s crumbling infrastructure.

The outlook for the US dollar

Although an overly aggressive fiscal expansion might lead to US dollar weakness as a result of concern for a spiralling US government debt, a well judged stimulus is likely to encourage US dollar strength because it will lead to rising US interest rates.

The outlook for bonds
Yields on government and corporate bonds have been artificially low for too long as a result of relaxed monetary policy and it seems likely that fiscal expansion in the US will lead to rising yields by virtue of its inflationary impact. It would seem that this trend is already underway in anticipation of policy change. It is important for investors to remember that for yields to rise, bond prices must fall and the extent of such falls will be correlated to the duration to maturity of such securities. Bond biased investors should therefore be focusing their positions on short dated and index-linked issues.

The outlook for equities

On balance, the outlook for US equities is positive. Firstly, a strengthening US dollar will provide further encouragement for US domiciled investors to repatriate their money, which will increase demand for US domiciled investments. A reduction in taxation will increase consumption and improve corporate profitability, which will support share prices. Domestically (US) focused businesses are likely to fare better than those that derive much of their earnings overseas as such earnings are diluted by US dollar strength.

The UK stock market should also benefit because the US dollar is the predominant currency of global business and many large UK domiciled companies earn most of their revenue in US dollars. A stronger US dollar will inflate profits in sterling terms, supporting higher share prices.

There will be losers as well as winners. Global emerging markets are likely to struggle as a result of a stronger US dollar because it will encourage investors to take money away from what are generally less liquid markets. It will also increase the debt servicing costs for many businesses. Nonetheless, in the long run a higher rate of GDP growth in the US would lead to growth in US consumer demand, which would benefit many emerging economies.

The outlook for the UK

The good health of the US economy is important for Britain, particularly as we embark upon what is likely to be an acrimonious divorce from the EU. Britain exports more to the US than any other country and significantly, exports of goods and services to the US have been increasing steadily each year. In 2015 the value of these totalled £47 billion and represented 17% of our exports and crucially for the UK, which has a sizeable trade deficit overall, our trade with the US is in surplus by £14 billion. Therefore, we have much to gain from a vibrant US economy so we need to be hopeful that such vibrancy is created. We also need to be hopeful that our own politicians are sufficiently smart to negotiate favourable trade terms with the US.

Global financial markets are likely to remain volatile while they adjust to the idea of a new pathway for the US economy. There will undoubtedly be plenty of financial media hyperbole along the way and ‘Trump Tantrum’ and ‘Bond Sell Off’ will probably be overused headlines.

However, the important thing is that long term investors need not worry; provided of course that they have a sensible asset allocation strategy. This is an area where we do particularly well for our clients so we hope this reassures them that we have it covered.