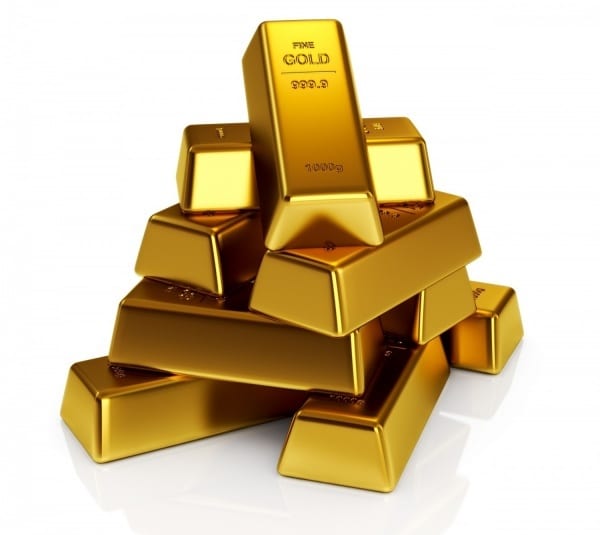 Gold has been one of the few beneficiaries of the credit crisis. After decades of relatively lacklustre returns, the gold price began to break out of its long-term trend during 2006 and 2007 as some investors sensed that the global economy could overheat.

The movement of money into gold from more volatile asset classes such as equity, corporate bonds and commercial property accelerated in the run-up to the banking crisis and this provided the momentum for further price increases. The robust action taken by central banks around the world to bail out the banking sector initially encouraged a strong recovery in most other asset classes during the latter half of 2009. This was primarily due to relief on the part of investors that things were not going to be quite as bad as initially feared. As investor appetite for risk returned, so the gold price flattened.

However, there has since been a realisation that the problem of excessive debt has not gone away. It is simply that much of it has been transferred from the private to the public sector. The situation is exacerbated by the substantial fiscal deficits in much of the developed world. Investors now fear that some countries will struggle to meet their debt obligations and particular attention is currently focused on the euro zone. Fears about currency devaluation, sovereign default and the increased possibility of lower than hoped for economic growth have encouraged even more money into gold, which is seen as a safe haven.

Unlike financial assets such as cash accounts, fixed interest securities and shares, a bar of gold in a vault is well insulated from banking risk, default risk and the not quantified risks that lurk out there, such as the blown oil well that has wiped £100 billion off the value of BP. In a less certain world gold is seen to provide a little certainty.

Gold is traditionally priced in US dollars per troy ounce and 10 years ago the price was around $300 per ounce. Recently, today the prevailing price is over $1,200 per ounce. Traditionally the $1,000 mark was seen as the barrier which gold would not break but the price has broken through this level during the last year – and significantly has continued to rise. The chart showing the movement in the gold price over the last 10 years shows how momentum has gathered in recent years, but note the flat period that prevailed previously. 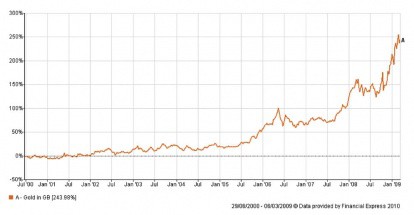 It may be tempting to jump on the bandwagon, but a few words of caution. Gold does not generate an income. Achieving a positive investment return therefore relies upon the ability to sell at a higher price than paid. This increases volatility in returns achieved.

Furthermore not all gold funds are what they seem. Many are heavily invested in shares of gold mining companies and therefore have a positive correlation with stock markets. This is not ideal if you are trying to provide diversity to your investment portfolio – your investment is effectively a play on the mining sector rather than a play on gold as a commodity.

Another consideration is cost. It is not advisable to keep your gold bars or coins under the bed – or even in a home safe. A safe deposit box or a specialist bullion dealer that allows you to purchase through a gold exchange would be the preferred option. There is a wide variation in purchase and storage costs so it does pay to shop around.

For UK investors it is also important to understand the significance of the sterling/US dollar exchange rate. The US dollar strengthened significantly against sterling during May but a reversal in this trend during June has, for sterling based investors, diluted the impact of gold price appreciation. Undoubtedly gold has served investors well as stock markets have jumped around and currencies have come under pressure. Certainly investors who turned to gold at the start of 2008 have benefited enormously from that early call. The question is has the gold price got much further to go or is the market close to its peak?

Guessing the top of a market is almost impossible. Inevitably, though, a peak will occur, and once the price starts to decline there is no compensation in dividends or interest. There might still be good reason to invest in gold but investors need to go in with their eyes wide open. There may be more gains to come in the short term, however all but the most nimble investors may do better to restrain themselves.