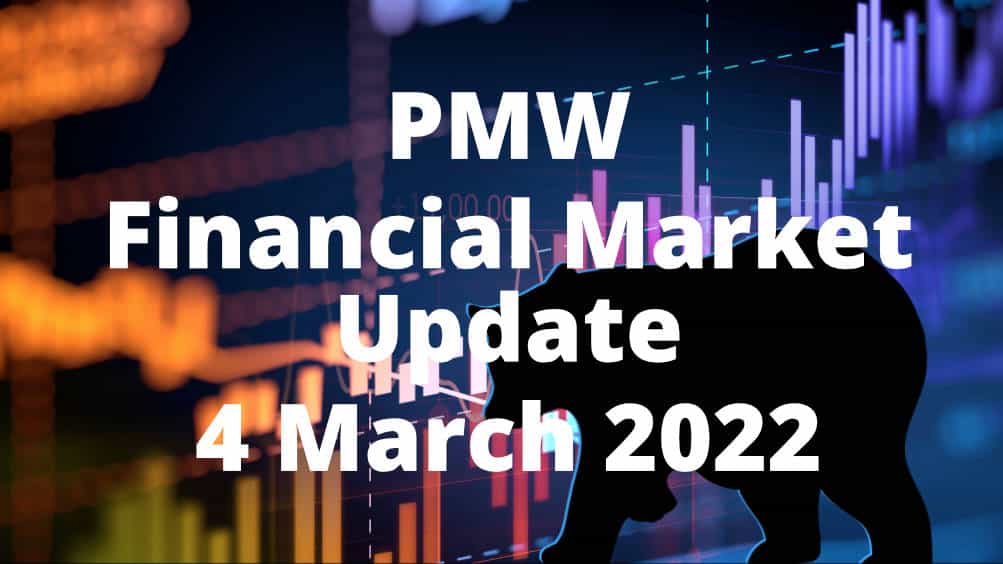 Financial markets performed strongly over the course of 2021 and PMW client portfolios were clear beneficiaries of this. However, 2022 has so far provided a stark contrast.

The one thing that investors dislike more than any other is uncertainty; something there has been no shortage of so far this year. In January, financial markets were unsettled by increasingly strong economic signals that rising inflation was likely to prove more persistent than previously expected. As a consequence, financial markets fell steadily throughout the month in anticipation of a much more aggressive change in monetary policy, delivered by central banks through steadily increasing interest rates and a reversal of quantitative easing.

In the background there was of course a nagging concern about the rising geopolitical temperature but financial markets took solace in the fact that from their perspective, there was no rational justification for Russia to mount a prolonged military campaign in Ukraine. The worst that was expected were a few military skirmishes and consequent land grabs on the Eastern border of Ukraine; a region that has effectively been at civil war since the Russian annexation of Crimea in 2014.

The final days of February provided investors with a reminder that it is foolish to assume that everyone else in the world has the same perspective. Whilst in the West it seemed that a full scale invasion of Ukraine would be an irrational action, with an unacceptable humanitarian cost, clearly Mr Putin and his inner circle think differently.

Financial markets have therefore been rocked by the occurrence of something that they believed would never happen and shocked by the brutality of its execution. With hindsight, the Western world was too complacent in conveniently ignoring the escalating military and territorial ambition of Mr Putin. There were plenty of harsh words but pitifully few actions. Let’s not forget that the first Nord Stream pipeline, which carried 59.2billion cubic metres of natural gas directly from Russia to Germany in 2021, went on stream within 12 months of the invasion and annexation of Crimea.

At this point in time, with the humanitarian consequences of the current invasion front of mind, it is hard to see any positives that might come. However, one thing we can be sure of is that the previous complacency and disunity of Western governments has been swept away by a foreboding reality. In future, a more serious attempt will be made to ensure resilience and security, factors which are fundamental requirements of thriving, open and democratic economies.

Clearly, the outlook is uncertain and investment volatility will continue. However, now is a time for investors to hold their nerve and appreciate that, provided the conflict is confined to Ukraine and does not spill over into a wider war, the global economy will continue to function. Therefore, companies will continue to trade and investors will continue to benefit from the profit generated by such trade. Yes, it is true that the extensive sanctions announced against Russia will have an impact on the global economy but we should not forget that the Russian economy is only the eleventh largest economy in the world and is little more than half the size of the UK’s economy. The impact is very much likely to be confined to the short to medium term, with such impact the result of dependence upon the supply of oil, gas and wheat. With time, the reduction in supply of these commodities can be made good by others.

There is no shortage in accessible reserves of oil and gas, the problem is simply a logistical one to facilitate supply to where there is demand.

Consider the possible outlook of a long term Russian occupation of Ukraine and the consequent banishment of Russia from global supply chains. This would prolong the current spurt of energy cost related inflation but the global economy would continue to grow. Over time, financial markets would gain comfort from a reduction in uncertainty.

Financial markets have already corrected to price in the economic headwinds that we now face. History has shown that no matter how terrible the circumstances that precipitate their fall, financial markets survive and ultimately recover.

As a client of PMW, your portfolio is much diversified and engineered for resilience. In my view, now is not the time to be worried about your investments.